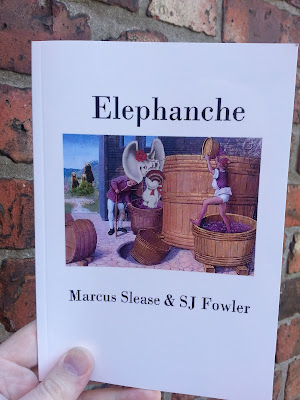 Richard. Hi Marcus and Steve. We’re talking today about your joint work Elephanche published by Department Press. I was familiar with both your work prior to reading the text yet nevertheless was taken completely by surprise by Elephanche – it seemed so different to me; that’s different to both the work of your own that I’d read before and different to pretty much anything else I’d come across previously. So, I have two initial questions then: how did Elephanche come about? I mean in terms of what influences etc fed into it? And, thinking of continuities and differences, how do you two view Elephanche in the context of the rest of your work?

Marcus. For me Elephanche is an extension of my fascination with the poet Kenneth Koch’s crossing and recreating genres. He has done some terrific comics that are somewhere between poetry and comics. He wrote a terrific novel, The Red Robbins, where Santa Claus and the Easter Bunny are mortal enemies in a post-colonial context. His plays are unlike any other poet’s plays. He once said in an interview that we tend to remember only a few minutes of a play. He wanted his plays to be a condensed form of a play. Sometimes his plays are between minimalist poetry and vaudeville theatre. In all of his work he displays a light touch. What others have called a non-oppositional avant garde.

Steven. Hey Richard! Well I think Marcus’ passion for Koch & co really seemed to align with an interest I had in theatre that was clearly against ‘theatre’, most especially the avant garde tradition of the 20th century, people like Ionesco and Ghelderode are big for me. I kind of hate theatre, I certainly hate going to the theatre. But I read the texts of plays, and have found so much in quite obscure playwrights. In a way reading these plays through the lens of poetry I came to similar conclusions as Marcus, that the play as a form can be eminently, and vitally poetic, only my influences were less aware of this context. I thought Elephanche could allow me to take my own poetic into a new form and somehow subside it, or conceal it, knowing most readers would be thinking through the elephant in the room, that the lines were meant to be acted out, and that would allow a kind of aesthetic juxtaposition to take place between contextual expectation and reality.

R. How did you two come to collaborate? Did you recognise a complementarity about each other’s work which suggested a collaboration might be fruitful or rather was the opposite the case – you were curious to see what would result from a coming together of differing styles?

S. Elephanche truly began from Marcus and I being friends I think, I’ve got so much time for him as a human being and liking his work too, appreciating its quality and its difference from my own work, I really wanted to develop something substantial with him as a collaboration. I think the reason I’m in poetry as a community act is to find people who write so well they make me think I could never come close to achieving what they do, because of the originality of their expression and voice, or whatever you’d call it. I find this in Marcus’ work.

M. Steven and I began working on the plays over a year ago and performed a few at the Writer’s Forum. I think we had two very different aesthetics at work. I think one of the differences is maximalist versus minimalist. I was working with minimalism and Steven was working with maximalism. Another difference might be that Steven was working within the tradition of the historical avant garde and I was working within first and second generation NY School poetry.
As you mention, I think there is a precedent for this with the work of Tom Raworth. Raworth is obviously influenced by NY School poetry (among others and vice versa) but his writing is nothing like what we might typical associate with NY School poetics. His poetics is something entirely unique both on the page and in performance. I can only hope we achieve some of Tom’s originality in our plays. For me he is a huge inspiration.

R. And could you tell me how you both managed the collaborative process on this project – maybe talking as well about how this project compared to previous collaborations you’ve been involved with?

S. Yeah in the last year I’ve been involved in over eighty collaborations. At first we exchanged whole plays, going from one to the next and sitting them aside each other in the collection. More recently we truly integrated those texts, writing over and through our lines, adapting our own poetics to each others, depending on the nature of each separate piece. There are 9 plays, and I think the book is actually quite concise, it captures a certain narrative between us that actually ends up being very sympathetic.

The final editing stage was more radical. Steven realised that we needed to collaborate more fully. So I edited the plays he wrote. I inserted some of the minimalist non-oppositional aesthetic of NY School poetics. Often this took the form of random lines from selected poems of Frank O’ Hara. These were chosen randomly. Or perhaps random is the wrong word. I don’t know if random exists. They were chosen without the interference of the sometimes rational fascist mindset. Steven edited the plays I wrote and expanded them with his maximalist approach. I think we both realised we did not want to iron out the tensions between the maximalist and minimalist or the humour/light touch and  grotesqueness. An issue for me in collaboration (whether writing with various selves or another human body) is whether to keep it chunky or smooth it out. Both chunky and smooth have their merits. I would say we mostly have chunky here.

R. What general thoughts on collaborations do you have? I mean, what gains and losses (if any) does the collaborative process bring?

S. All gains for me. The collaborator becomes a source for new work, and new work is the life of life. I grow when engaged in that process with another human being, as long as I admire them or their work as a human being, then it can only allow me perspective on my own ideas and work, and more understanding of why I like what I like and write what I write.

R. The cover image of Elephanche – that’s by Tom Raworth right? How did Tom become involved with the project?

S. Tom has been immensely generous to me over the last year or so, I’ve had the pleasure of visiting with him a few times, having some tea and scones and that. One afternoon the conversation between myself, Tom, his wife and my wife ended up exploring the notion of an elephant who was employed on a barge floating down the rhine crushing grapes to make wine while firing grapes from its trunk at tourists, and similar things. The Elephanche artwork was born that night I believe and Tom was kind enough to let me use it for the book.

R. Raworth’s presence does seems entirely fitting though of course given the use you make in Elephanche of text from O’Hara and Berrigan (someone, I forget who now sorry, having once wondered how Tom Raworth could ever be described as anything other than a New York poet). Could you talk a little bit about why the New York poets for you both at just this particular time? What was it that drew you to their work now?

S. Honestly my knowledge of the New York poets in quite shallow, they don’t exert an influence over me because I seem to be saving them for the future and they didn’t naturally come up in my strange, individuated reading arc. I will do though, Marcus and Tim Atkins have been generous in allowing me educated access to that world of work. 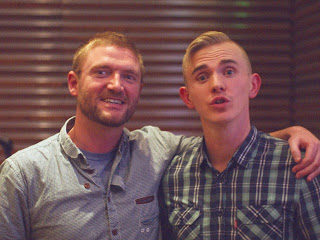 Depart is the new website for Department Publications. Henceforth Department will concentrate on the print publication of books / pamphlets. The editor is Richard Barrett.
Depart is also open to the possibilities of online publication of poems, texts, provocations, polemics, laments, spelling errors, sleeping terrors.
Please send submissions to departmentpoetry @ gmail dot com, removing the gaps & replacing dot with
a .


At the moment Department is not accepting new book submissions. Please check back later.

However we are again accepting e-submissions for this site. Please send to g.mail. address.

The Poet is Working, David Berridge